Golestan founder and ED, Yalda Modabber, lost her mother on September 2nd 2019. In honor of her mother’s life-long commitment to art, science, and languages, Golestan established a scholarship fund in her honor. 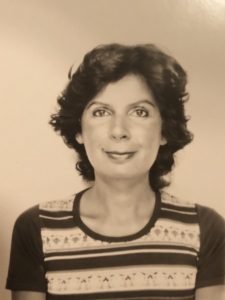 Minou (Bayat) Modabber was born in 1937 and raised in Egypt by parents of Iranian decent. She earned a full scholarship to The Academy of Art in Rome and left Egypt for an adventure in Italy against her parents’ wishes. There, Minou studied Set Design and Art History, and went on to work as a drafter at an architecture firm for two years after completing her undergraduate studies.

From Rome, Minou moved to Los Angeles to be closer to her twin sister, Mangol (Goli) Bayat, where she met her husband, Farrokh Modabber, a PhD student in the Immunology/Microbiology department at UCLA. Minou and Farrokh moved to Boston in 1969 for Farrokh’s Post Doc at the Harvard Medical School, which is when Minou began to dabble in Medical Arts when she helped him with his graphics for posters and publications.

In 1970, they had their first and only child together, Yalda. Four years later, they moved to Tehran where they thought they would settle indefinitely. In Iran, Minou, who spoke six languages fluently, worked as a translator while also continuing a prolific career as an artist. In one exhibit, she sold out of over 50 pieces on the first night of her show. By the 1979 revolution in Iran, the couple had separated, and Minou went back to Boston with Yalda.

Minou continued to create art as a single mother, while working as an Administrative Assistant at the Harvard School of Public Health. One year later, she was hired by Dana Farber Cancer Institute to run the Medical Arts Department. She ran the department for 39 years until her retirement in April 2019 at the age of 81.

In July 2019, Minou went to see her primary care physician for what she believed to be viral symptoms (a sore throat and fatigue that didn’t improve with time).  By August, she was hospitalized because her esophagus was completely obstructed. A week later, she was diagnosed with Metastatic Anaplastic Thyroid Carcinoma.

To have passed away on the day that celebrates hard work from a disease for which she dedicated nearly four decades of her professional career seems both ironic and fitting. In her last days she kept saying: “I should have never retired!”

A scholarship fund has been created to commemorate Minou’s life. This fund is used for families in need of tuition support and has temporarily been allocated for emergency relief to support families during the COVID-19 pandemic and financial crisis. To contribute to the fund, use the button below. Please dedicate your donation to: The Minou Modabber Scholarship Fund.